Who were the Gods? Were they super-humans who came to Earth from outside our solar system? Were these aliens considered Gods by early Man because they arrived in illuminated spacecraft and possessed advanced knowledge?
Were these ‘Gods’ responsible for establishing religion on Earth?
What do the Inca, Maya, Sumer and Indian civilisations tell us of the existence of Gods?
Are the Seven Worlds (likes), the territory of the Gods? What happened to them? Where did they vanish?
Empire of the Gods delves with defining insight into the proofs that exist in scientific research, the writings of eminent thinkers, as well as India’s ancient scriptures and epics, about the presence, activities and characters of the Gods.
It also looks at how to attain the bliss promised by the Gods, the existence of an afterlife, and ways of meditation free from ritual.
This deeply researched and riveting narrative casts the clear light of logical reason on areas and concepts we have perhaps only imagined or thought of as science fiction. 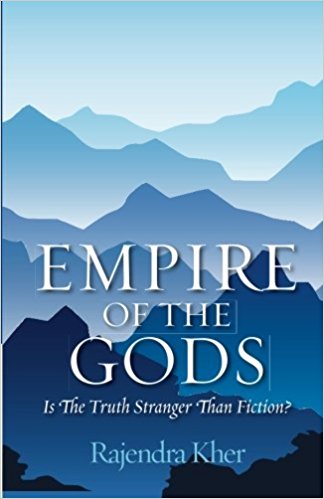 This is a non-fictional read and belongs to a very unusual genre — Our existence. This book throws questions at you and helps you dwell in the answers as well. The story is divided into three parts. In the first part, the author talks about the Devas as the super humans. He tries to link the flying chariots with the outer space objects and presents Devas as the Superhumans. The second part dwells on the formation of the world and the creators. The third and conclusive part preaches about the theories of karma.

The narration of this book is very intriguing and enchanting. It can be understood from the fact that I devoured this one in one sitting as it quizzes the reader and keeps dwelling on the answers at the same time. I cannot say that this book is solving the mysteries of human existence but this surely is going to make a few things clear. The theory of karma and the rise of virtuousness being my favourite chapters. We cannot talk about the characters of this book because there aren’t any precise characters to be described.

This book gives a light to your intellectual sight and clears out the vision which is quite necessary to be done for the youth in the current scenario. I think this book is a must read for everyone as it introduces a very intense topic in a very light and cosy manner. The book doesn’t create boredom and keeps going with the flow that remains uninterrupted with the flowing narration.

4/5 (Pick this one if you like to read spiritual stuff!)